The Egyptian Devaluation – One Year Later

The Egyptian Devaluation – One Year Later 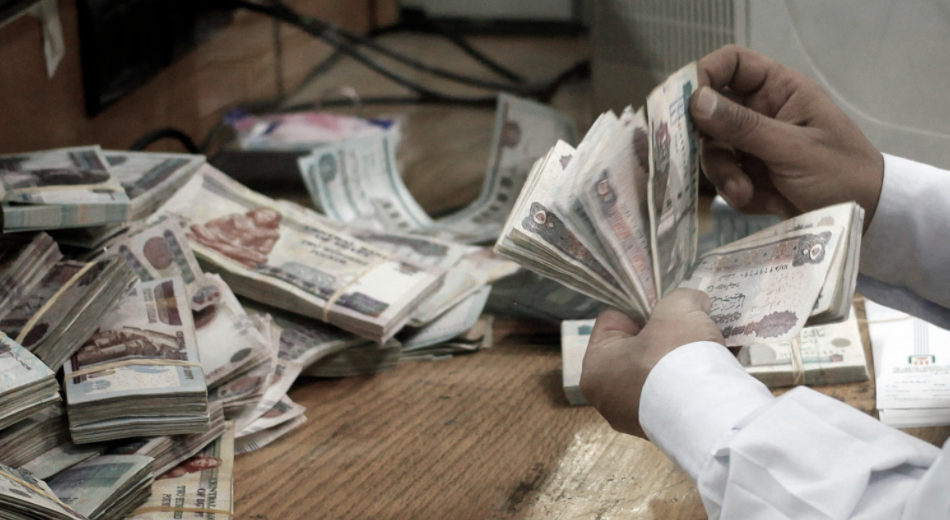 Over one year ago, on November 3rd, 2016, the Central Bank of Egypt floated the Egyptian pound in an attempt to stabilize the economy which had been set back by a shortage of foreign currency inflows and political instability. Among the key goals behind the floatation was to meet one of the key demands of the IMF to secure a $12bn loan, boost external competitiveness through a weaker currency, encourage foreign investors back to the country through a more transparent economy and to end the currency black market which was trading at double the price set by the CBE at the time of floatation [1] [2].

To assess whether the goals behind the floatation have proved to be successful this past year, we must look back to the situation that led to the decision.

In 2011, the Egyptian economy, still recovering from the 2008 world financial crisis, was also hit by political instability that also contributed to the decrease of foreign currencies inflows [1].

Lower oil prices and the fall in economic growth in the Gulf also indirectly had a negative impact on the Egyptian economy since many companies were laying off employees, of which many were Egyptians. This resulted in a drop in total remittances into Egypt of about 15% year-over-year in May 2016 [1] [2].

The tourism sector, a major source of foreign currencies before the 2011 revolution, was severely hit after a sequence of terrorist attacks in Egypt. The biggest hit was on October 31, 2015, when the Russian Airbus A321 was hit over Sinai peninsula shortly after takeoff from Sharm El-Sheikh killing the 224 passengers on board resulting in several countries suspending their tourism inflows to Egypt [6]. 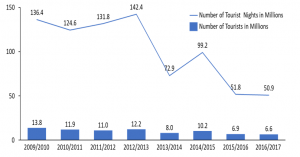 Suez Canal, the fastest shipping route between Europe and Asia and one of Egypt’s main sources of foreign currency was not an exception to the slowdown that faced the other sources of foreign currencies. Despite the completion of the ambitious $8.2bn parallel canal in August 2015 with a goal to increase revenues to $13.4bn in 2023 from $5.5bn in 2014, revenues have been decreasing since the opening of the new canal affected by a slowdown in the global economy. Annual revenue of the canal totaled to $5.2bn in 2015 and declined by 3.2% to $5bn in 2016. In July 2017, canal revenue reached $2.9bn. Based on these figures, the $13.4bn revenue goal by 2023 is highly unlikely [7] [8] [9].

Before the floatation decision on November 2016, the government tried several economic reforms which proved to have temporary effects because they did not tackle the main problems but rather reduced the severity of their effects. During the months that preceded the floatation, the CBE put a cap on the amount of dollars businesses or individuals can withdraw to ease the pressure on bank reserves. The cap included a maximum of $1,000 for travelers providing valid visa and flight tickets, $3,500 per month for travelers using their credit cards abroad and $50,000 to $250,000 for businesses to cover basic imports, given that banks had the right to determine the amount based on the necessity of the imported goods [10] [11] [12].

This step had several impacts on the economy and society. First, it reduced the pressure on bank foreign reserves as banks already had unmet commercial demand for dollars estimated at around $8bn to $10bn by the time of devaluation but it also flourished the currency black market where individuals and businesses resorted to cover their dollar needs that banks could not provide [1]. While this step was seen by many as one of the main reasons behind the expansion of the black market, this step led prices to increase gradually in the months that preceded the devaluation because most businesses priced their products according to the value of dollars they import with, which was mostly obtained through the black market as 90 percent of imported consumer goods were already being paid for at black market currency rates in the months before the devaluation [13]. 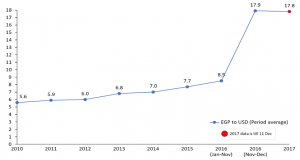 By that time, the devaluation prices were already adjusted/adjusting to the price of the black market which was around the same price after the devaluation. So, at the floatation period, prices increased but not by the same value the pound depreciated. Single reform proved inefficient in the past so parallel to the floatation decision, the Egyptian government took several measures to ensure the success of its wider economic reform program.

CBE hiked interest rates by 300 basis points to limit the inflation that’s likely to follow the weaker currency [1]. Agreed reforms with the IMF include increasing the government’s income from tax sources via the implementation of the Value Added Tax (VAT) and introducing a law to speed up the resolution of tax disputes and settlements, and in view of a different structure of progressive salary tax rates [2].

The government also began to restructure its subsidy program. A five-year energy subsidy reform program began in 2014 aiming at stopping energy subsidies by 2019. Electricity prices increased by 25-40% depending on usage in August 2016 [2] [10]. In July 2017, Electricity prices increased again by 15-42% for domestic use and by 29-46% for the commercial Sector [14]. Fuel prices increased 2 times since floatation [15]. The government is moving into a cash-based subsidy system, where the less fortunate get their subsidies in cash, rather than subsidizing food commodities and fuel for all [2].

In addition, an infrastructure intensive works policy were launched such as the construction of a new $45bn administrative capital [16], the construction of the third metro line in Cairo, the expansion of the port of Sokhna and the renovation of the rail and road network, which offers numerous investment opportunities to foreign companies [2].

A new investment law was also passed to attract more foreign investors. According to the new law, investors have the right to finance the project from abroad in foreign currency and are entitled to derive profits, transfer profits abroad, or liquidate the project and transfer the output of liquidation abroad [17]. Foreign employees of investment companies have the right to transfer their compensation abroad. Investors can also recoup half of what they pay to acquire land for industrial projects if production begins within two years and have a 50% tax discount on investments made in underdeveloped areas [18].

Right after the devaluation decision, the Egyptian stocks soared, with the country’s main stock index, the EGX30, rising by about 8% [1]. In less than a week, EGX30 hit a five-year high. Foreign investors and institutions, including Gulf-based investors, were on the buying side, only local investors were sellers. This was a quick and strong sign of a renewed confidence that international and regional investors have in Egypt’s economy [2].

Corporate executives claimed they will be able to make investment decisions based on a transparent, predictable currency market run by banks, rather than an opaque black market in dollars that swung wildly amid profiteering and speculation. “Before, I used to say we were moving in the dark. We couldn’t see because the situation was so blurred. Now at least we have the lights turned on,” Hani Berzi, chairman of Edita Food Industries [13]. Furthermore, the CBE approved commercial banks to sell USD to clients looking to repatriate profits. Whilst the effect of this decision on the stock market was optimistic, businesses with M&A transactions in the pipeline have been in a better situation as a foreign investor who was not willing to bring money into the country with no guarantee of getting their profits out, are now more comfortable investing in Egypt [2].

On the other hand, a percentage of Egypt’s population moved below the poverty line overnight following the EGP floatation [2], the devaluation ate into the incomes of many Egyptians, seeing their savings divided by half overnight. Among the middle classes, travel abroad has become harder, students saving to study overseas, and luxury goods became unaffordable for many. “We are now calling it Black Thursday,” one Egyptian said referring to the devaluation day [13].

One year after the floatation, “Egypt is in a better place than last year,” says Chris Jarvis, the IMF mission chief for Egypt. “I think they have already taken the most difficult steps on the macroeconomic level and what remains is to continue [with the reforms]. But it doesn’t involve a lot of big adjustments, certainly not over the next few months.” As foreign inflows have increased, and remittances have picked up, foreign reserves have increased from $19bn in October 2016 to $32bn at the end of November 2017 [19]. According to the Global Competitive Index 2017-2018, Egypt is the most-improved country in the Middle East and North Africa compared to the previous year ranking. Egypt ranked 100 out of 137 in GCI 2017-2018 compared to 115 out of 138 in GCI 2016-2017 [20].

However, for Egyptian businessmen, the resolution of one problem has triggered a new set of challenges: soaring inflation and rising borrowing costs. These issues are causing some companies to put their expansion plans on hold. Firms that have foreign currency debt have been left exposed after the pound lost half its value after its flotation. Manufacturers who rely on imported inputs have seen their working capital fall by as much as half. Inflation running at around 30 percent has also hit the buying power of customers. “People are borrowing for working capital, but the risk does not justify a long-term capital investment. You have to be making sustainable profits in the order of 30 to 35% in order to take loans at 22 to 24%,” Omar al-Shenety, Managing Director of Multiples Group, a private equity firm and investment bank [19].

Egypt has become a more affordable destination than before, as a travel or investment destination, both should lead to an inflow of foreign currency and Foreign Direct Investment (FDI) into the market and increased economic activities. However, there is a time lag, as investors will only start coming once they feel that the USD: EGP rate has reached stability and that the speculation/high volatility periods are unlikely to occur again. The country is now well positioned to compete in global markets. Egypt’s exports should continue increasing as it is now able to offer a more competitively priced product amidst global competition. There is good potential for local manufacturers to seize the opportunity of the current high cost of imports, by offering competitive, and more affordable locally produced products. Companies can now benefit from the free float as forex losses will now be recognized by the tax authority [2].

The low cost of labor is creating jobs, especially for young people with digital technology and foreign language skills. Customer service giant Teleperformance, which fields calls for corporates like Expedia and Vodafone, has shifted jobs from Greece to Cairo, where wages are as much as 60% less than in Europe. Uber’s general manager in Egypt said “Things are moving in the right direction. In less than two years we have hired 50,000 drivers. Necessary changes that should have happened years ago are finally happening. This is the time to put the perfect platform in place and lay the groundwork for future growth in Egypt” [21].

[2] The EGP Devaluation: A new beginning

[6] CHRONOLOGY OF ATTACKS on TOURIST TARGETS IN EGYPT: a DETAILED HISTORY from 1992 to the PRESENT.

[13] Egypt to face pain before gain after massive currency devaluation

[21] Like a phoenix, Egypt economy is rising from ashes