HomeInsightsBlogBlog CategorySolar powered oil recovery: a model for the future?

Solar powered oil recovery: a model for the future?

Solar powered oil recovery: a model for the future?

Over the last decade, due to its maturing oil fields and limited reserves, Oman’s domestic crude oil production relied heavily on Enhanced Oil Recovery (EOR) methods. Just as in Oman, most of the global oil production comes from mature or maturing fields with an average recovery factor of around 30 to 35 percent. Since 50 to 70 percent of the oil hasn’t been recovered, maturing oil reservoirs possess enormous potential. In previous years, production through the three main EOR methods, thermal recovery, gas injection, and chemical injection, was about 3 million barrels per day (b/d) or 3.5 percent of the world crude oil production per day (Gregory, Omom, and Greil 2014: 16). Of these 3 million b/d, 66 percent were produced through thermal recovery (Kokal and Al-Kaabi 2010: 1).

In general, the process of recovering oil is broken down into three different phases: primary, secondary, and tertiary recovery. 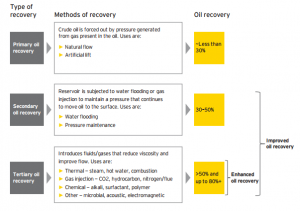 Primary and secondary recovery are considered conventional recovery and target the mobile oil in the reservoir, whereas tertiary recovery targets immobile oil which cannot be recovered due to capillary and vicious forces. Tertiary oil recovery, referred to as EOR, relates to the injection of gases, steam, oxygen, air, polymer solutions, gels, surfactant-polymer-formations, alkaline-surfactant-polymer formations, or microorganism formations into the reservoir, as these fluids reduce the viscosity and thereby enhance the flow of oil (Gregory, Omom, and Greil 2014: 14).

While steam injection is the preferred EOR method, especially for heavy crude[1] with a high viscosity, there are different ways of how to produce the necessary steam. In the conventional steam injection method, natural gas is burned to produce steam from boiling water. The Concentrating Solar Power (CSP) technology merely replaces natural gas with solar power. Petroleum Development Oman (PDO)[2], the major exploration company in the Sultanate, was fighting declining oil output from its maturing reservoirs with the enhanced usage of steam injection produced with natural gas. However, it became gradually more difficult for the country to satisfy the growing domestic demand, driven by the need for gas in generating power and the development of other industries (Sergie and Dipaola 2015).

To limit the quantity of imported gas, the Omani government together with its partners, Shell and Total, decided to invest $600 million in the construction of the Miraah – Arabic for a mirror – solar power plant. Located at the Amal West oil field in the southern part of Oman, the 1,021 MW solar-thermal facility could save up to 5.6 trillion btu, enough to provide 209 000 Omanis, 5 percent of the country’s population, with electricity (Kantchev 2015; Kramer 2017). Steam generated from the CSP technology has the same quality and temperature as the one generated from gas and resembles a perfect substitute. The solar technology used at the Miraah power plant does not use solar panels but large, curved mirrors which automatically track the sun throughout the day, concentrate the sunlight on a pipe filled with water, bring it to boil, and thereby produce high-pressure steam. Upon the successful completion of a 7-MW pilot project in 2013, the company GlassPoint started construction on the Miraah plant in 2015 (Renewable Now 2017).

The American company pioneered an enclosed trough system which is particularly suited to transport the CSP technology from the arid region of southern California to the desert environment of the Arabian Peninsula. Setting up the solar mirrors inside a greenhouse results in three major advantages: reducing costs, achieving high energy density, and protecting sensitive technology.

To avoid soaring custom project costs, GlassPoint builds its solar fields in glasshouse blocks using a series of standardized steps, where the majority of the system is comprised of prefabricated components that can be easily assembled onsite. Routinized constructions steps not only improve the speed of deployment, but by doing so also drive down the costs of construction. This point was validated on November 1st, 2017, when PDO and GlassPoint announced that the first out of 36 blocks that constitute the solar plant was completed on time and on budget (PDO 2017). Standardized construction measures as well as the availability to fall back on lower-cost material thanks to the protection offered by the glasshouse, drastically decreases the production costs.  Furthermore, the straight surface of the greenhouse positively affects operating costs as it allows for easy cleaning by a robotic system, compared to a slightly more complicated cleaning process for the curved mirrors. 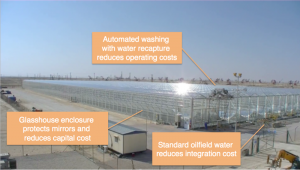 The second advantage of the enclosed troughs is that the glasshouse blocks provide high energy density as 93 percent of the land area can be covered with mirrors. Since the materials used in an enclosed trough can be low-cost, it is more cost-efficient to pack the collectors tightly together into a smaller space (GlassPoint 2017: Standard Block). The additional energy generated during peak sun hours, when the sun is high in the sky, far exceed any losses from shading caused by neighboring mirrors during the low sun hours. Achieving high energy density is crucial for EOR applications because steam needs to be produced close to the oil field so that it travels the shortest distance.

Without the protection offered by the glasshouse, sand and dust storms, common phenomena in the deserts of the Middle East, would decrease the efficiency of the mirrors through soiling. Because the glasshouse has a height of 6 meters above the ground, soiling rates are 50 percent less compared to objects that are merely 1 meter above the ground (GlassPoint 2017: Sealed from Dust). The glasshouse also prevents damages to the mirrors and other delicate components of the system caused by sand, wind, and humidity.

The Miraah solar plant could produce up to 80 percent of the steam that is needed for the EOR (Power Technology). This would allow Oman to free up natural gas currently utilized for EOR and use it in other parts of its economy. Furthermore, substituting natural gas with solar steam would remove the largest and most volatile cost of thermal EOR: the price of gas. Even though a certain amount of gas would still be required to maintain steam injection at night, CSP has the potential to drive down the quantity of natural gas needed in producing steam.  With a stabilized oil price in the range of $55 to $65 and an increasing demand for the use of natural gas in other parts the economy, the capital-intensive investment needed for CSP is becoming more attractive. Yet, the spread of the technology will also depend on the success of and insights from the Miraah power plant. As GlassPoint continues construction on time and on budget, national and international oil companies trying to increase the recovery rate of maturing fields might consider substituting natural gas for solar energy.

[1] The viscosity resembles a particular attribute that defines the quality of crude oil and is expressed in API (American Petroleum Institute) gravity. An API of 40 and higher resembles low viscosity and stands for high-quality crude oil. Due to its increased mobility (fluidity), reservoirs containing light crude reach a higher recovery factor at a lower average cost, while at the same time light crude reaches higher prices on the world market as it requires a lower quantity of energy during the refinement process. Heavy crude on the other side, with an API below 20, is very thick and therefore immobile. Contrary to light crude, recovery costs for heavy crude are higher and the prices exporters obtain on the world market significantly lower as more energy is required for refinement. Thermal EOR methods for heavy crude become economically justifiable once the oil price reaches a certain level.

The Egyptian Devaluation - One Year Later