In southern Morocco, on the edge of the Saharan desert, sits one of the world’s most remarkable engineering projects: the Noor Power Plant. This is the second largest solar plant in the world with a total capacity of 510MW and an area that dwarfs the nearby city of Ouarzazate.

However, its staggering size is not the only thing setting this power plant apart. Unlike most solar projects which use photovoltaic (PV) technology, the Noor Power Plant employs Concentrated Solar Power (CSP). While PV exploits the chemical and physical properties of photons hitting a solar cell (see photovoltaic effect), CSP exploits the thermodynamic properties of the sun. In simplified terms, a CSP plant has mirrors concentrating sunlight on a thermal receiver (normally molten salts) heating it up to 150–350 °C. The heat trapped in this fluid is then used to generate steam to drive a turbine connected to a generator, much like any other thermoelectric plant. This process is fundamentally different from a PV installation where the solar panel itself is the generating element.

This difference has a crucial impact on the point of dispatchability. Without investing in additional battery storage assets, a PV facility can only dispatch electricity as it’s being produced. This is a huge drawback since it means that a PV system must usually be integrated by an alternative source of dispatchable energy to cover non-productive hours (nighttime, cloudy weather, etc…) or invest in expensive storage solutions (usually l-ion batteries). R&D has made strides in electricity storage techniques, but these remain a costly solution for utility scale projects.

Instead, a CSP system can intrinsically store potential energy as heat in the working fluid for hours allowing producers to choose the time and amount of energy to dispatch even when the sun isn’t shining. This means that it does not need to be integrated by other power sources and does not require expensive electricity storage solutions. The storage capabilities have been rapidly improving just over the past few years too. Taking the Noor Power Plant as an example, Phase 1 (commissioned in 2016 ) has a storage capacity of 3 hours while Phase 2 and 3, which came online only 2 years later, can store energy for 7 hours.

Despite this significant advantage CSP only accounts for less than 2% of all solar power projects. Why is this? The main factor has to do with space. CSP requires approximately twice as much acreage as PV to produce the same energy. In addition this area must be contiguous since the mirrors must reflect on a single heat receiver. Adding to this direct cost are the costs associated with construction in vast, barren, flat and hot places, i.e. deserts. Projects in these remote locations require construction of ancillary infrastructure such as longer roads, transmission lines, facilities, and transportation. This translates in higher capital expenditures for CSP.

While the space requirement and associated costs are intrinsic to the technology, another cost factor are the installation costs which are still significantly higher than PV due to the relatively low developer experience and limited supply chain. Yet, these are already declining due to the slow but constant commissioning of new projects. In fact, 2018 saw a 26% drop in the global weighted average Levelized Cost of Electricity (LCOE) over 2017. 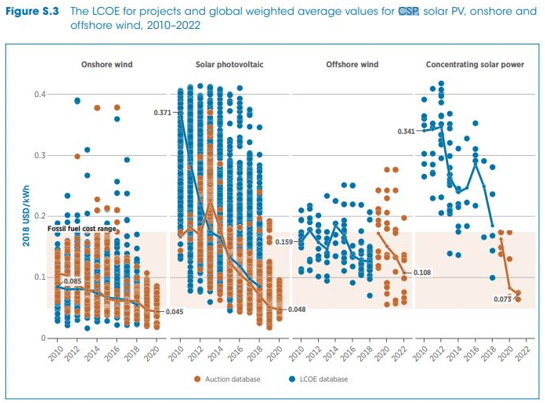 CSP’s LCOE in 2018 was 0.185 USD/kWh, significantly higher than PV’s 0.085 USD/kWh. This is also still above the fossil fuel cost range (0.05-0.17 USD/kWh). Notwithstanding, current auction and PPA data suggests that by 2020 CSP will offer electricity in the USD 0.06 to US 0.10/kWh range. Dropping costs and dispatchability are bound to significantly accelerate the adoption of this technology worldwide.

However, it may be wrong to view CSP and PV as competitors.  As illustrated earlier, these are two fundamentally different technologies. It is the opinion of this analyst that CSP is better tailored for large utility scale projects while PV is better suited for distributed energy production and smaller capacities (rooftops, parking lots, self-consumption, etc…). CSP may be better understood as a direct competitor of other dispatchable thermoelectric energy producers such as gas and coal plants. Afterall renewable technologies should supplant fossil fuels not each other.

This certainly appears to be the idea of the Moroccan Renewable Energy Agency (MASEN) which aims to blow the historical achievements set by the Noor plant out of the water with the Midelt project which integrates CSP and PV to produce 800MW in order to meet its 2020 target of 2000MW solar capacity.

Over 2,000 years have passed since Archimedes used sun-mirrors to burn Roman ships to break the siege of Syracuse, it appears that we may have to rely on the same idea to get ourselves out of an even bigger mess yet again.