The US-China Trade War has seen two of the world’s largest economies battle each other through increased tariffs, political speeches and propaganda. While the presence of both countries in international cooperation forums, such as the G-20 summit should imply that there is hope for a quick “cease fire”, the current scenario points at a long, and more importantly, costly war.

Economists estimate that the expansion of tariffs in US-China trade, and a consecutive fall in financial markets, could represent a decline of the world’s GDP by 0.6% ($600 billion) in 2021.

Even though Africa is not a direct target in the US-China Trade War, the continent is already being affected by its impacts. U.S. tariffs have contributed to drops in commodity prices, local currencies, and major stock exchanges across Africa, shaking investor confidence in the continent. Moreover, the expected slowdown in the Chinese economy will also hinder the exports and government revenues of many economies across the African continent.

However, in this scenario where the world’s largest economies are colliding, there are still opportunities for Africa to reap some benefits. More importantly, despite recent initiatives such as the Continental Free Trade Area (CFTA), the impacts of the trade war have exposed many pending tasks for Africa in terms of economic development. These pending tasks are not only preventing the economies of the continent from reaping further benefits from the Trade War, but also hindering their long-term prospects for economic growth and development.

The Threat of the Trade War

The African Development Bank estimates that the trade tensions could cause a 2.5% reduction in GDP in resource-intensive African countries and a 1.9% reduction for oil exporters by 2021. In some African economies, the fall of commodity prices has affected export values and revenue generation for some governments.

This is especially important for countries and governments that rely on the exports of a small set of commodities with non-African partners, including China. Moreover, weak manufacturing sectors, infrastructure gaps, domestic instability and unsustainable economic policies have hindered the economic diversification of many countries in Africa, making them extremely vulnerable to falls of commodity export volumes and prices. 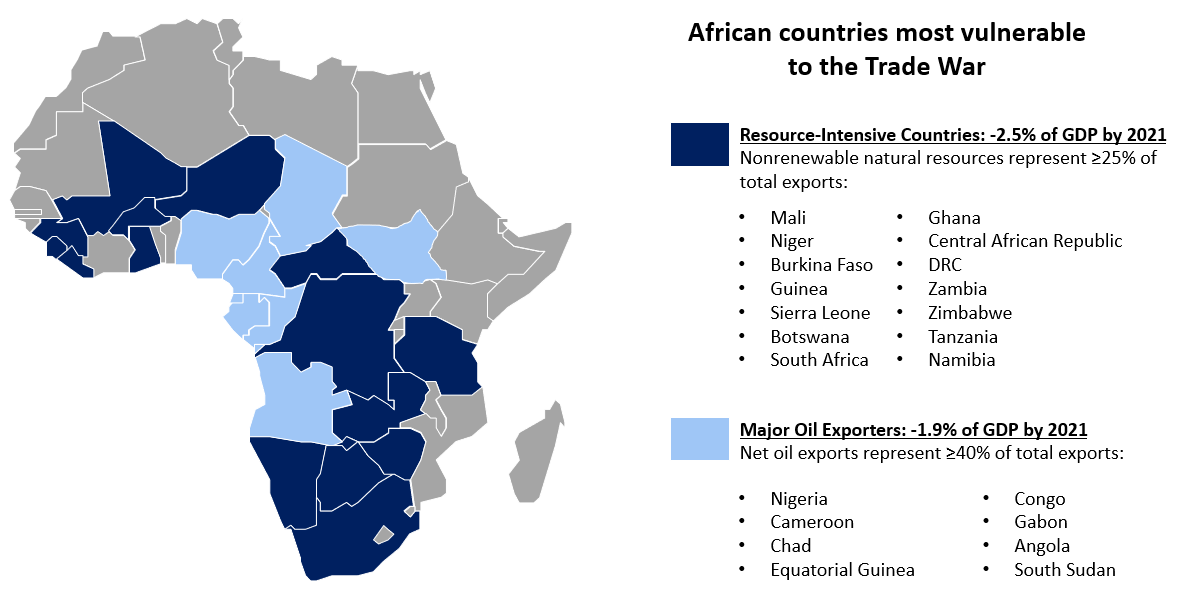 Source: CSIS with data from IMF and the African Development Bank.[/caption]

The International Monetary Fund (IMF) lowered African growth projections from 3.3% to 3.1% for 2019 due to rising trade tensions, Brexit and slow growth in China, and warned that the trade war could cause a 1.5% drop in Africa’s GDP growth by 2021.

A decrease in demand from China could also reduce annual imports from Africa by $75.26. China is Africa’s top trading partner and represented 12% of total African exports during the past 5 years, with raw material representing most of the total exports from Africa to China during the period. While the reliance on China does not seem very large at continental level, some African countries are heavily dependent on China for their exports.

Source: Own elaboration with data from ITC Trademap.[/caption]

Some of the most developed economies in the continent, such as Nigeria and Morocco have a relatively diversified trade balance in terms of partners, and China does not weight heavily on their export activity. However, countries such as Sierra Leone, Congo and Angola depend on China for half of their exports, with South Sudan being a more extreme case relying on China for almost 100% of its exports.

Source: Own elaboration with data from ITC Trademap.[/caption]

While some sources point that the trade war might bring new commercial opportunities for many countries, African economies and businesses are not well positioned to obtain great benefits in this scenario. Even though manufacturing companies are relocating their operations outside of China to avoid US tariffs, other regions with more developed manufacturing sectors and more integrated supply chains, such as Latin America and Asia, are better positioned to reap the benefits and attract these investments.

South Africa is probably the only economy in the continent with the capacity to obtain some benefits out of the trade war in this scenario, despite reports of Chinese entities approaching other countries such as Nigeria and Ethiopia.

Despite the daring scenario for many African economies, there are still opportunities to gain some benefits out of the dispute between the US and China.

During late 2018, China started to seek further trade integration with Africa. At the Forum on China-Africa Cooperation, both parties adopted a joint statement and a three-year action plan, looking forward to deepening cooperation in various fields, including boosting trade, nurturing the African industry and reinforcing security.

China increased its imports of crude oil from Angola and other countries in order to compensate for the decline in import of natural gas from the US. During 2017, ~40% of China’s crude oil imports came from the Middle East and ~20% from Africa. As China seeks to reduce its reliance on the Middle East and the US, China’s proportion of crude oil imports from Africa could increase up to 30%.

Additionally, in order to secure deals on crude oil in Africa, China will continue to invest in the continent through FDI, which cumulatively surpasses $40 billion, and increased offerings of loans and grants, such as the $60 billion financing offered during September 2018. This is in line with recent trends in infrastructure funding in the continent, with China representing 16% of the total infrastructure funding commitments to Africa during 2013-2017.

Source: Own elaboration with data from the Infrastructure Consortium for Africa (ICA)[/caption]

Meanwhile, the continent-as-a-whole is already taking significant steps towards self-reliance and economic diversification.

The entry in force of the Africa Continental Free Trade Area (CFTA) earlier this year is a great initiative to boost intra-African trade, economic diversification within the region, and put African countries in a better position to attract investments. The CFTA will provide a framework that will allow investors to enter a market of 1.3 billion people and a combined GDP of $2.2 trillion. The CFTA transition phase alone has the potential to generate welfare gains of $16.1 billion and increase intra-African trade by 33%.

Earlier during August 2019, the Southern African Development Community (SADC) signed a protocol on industry aimed at promoting harmonized industrial development policies and strategies in the region and move economies further away from exports of raw materials.

Pending tasks: infrastructure gaps and the need for better regulation

The trade war has exhibited not only Africa’s level of dependency on China, but more importantly, the many internal weaknesses in the African economy in general. Continental trade agreements and industrial development policies are beneficial, but only to the extent to which African economies can materialize and spread their benefits.

Although the African continent shows recent signs of progress towards economic development, diversification and integration, this needs to be supported by addressing the continent’s infrastructure gap and improvement of the business environment to facilitate the entrance into the formal economy in order to ensure that the benefits of economic growth are materialized and spread, and further contribute to the economic transformation of the continent.

Despite the reported increase in funding, the continent still has an infrastructure gap of $130-170 billion per year, and an annual financing gap of $68-108 billion. This gap includes continent-wide needs such electrification, access to water and sanitation, information and communication technology coverage, as well as transport infrastructure. The current quality and high costs of infrastructure services in the continent constrains productivity by up to 40% each year and reduces Africa’s annual GDP by 2%.

In terms of quality of the business and investment climate, a key factor to assess the ease of entering the formal economy, Africa stands below the world average, as shown by the regulatory performance of North and Sub-Saharan Africa during the past 4 years. Moreover, there are huge disparities among African countries in terms of their regulatory performance; some of the continent’s top performers are well above the world and regional average, while others are still below these thresholds.


While external events have an important impact on Africa’s development, the continent is still being hindered by internal struggles. Even in a scenario without a trade war, there would still be plenty to talk about regarding Africa’s development challenges, opportunities, and the substantial progress observed across the continent in recent years.

One thing is certain: recent events such as the Trade War and the Brexit indicate that it is no longer “business as usual” for Africa and the developing world as “our country first” policies in developed countries are now changing the status quo of the world economy.